A Different Kind of Retirement 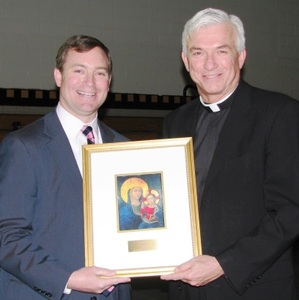 Love is shown more in deeds than in words,” St. Ignatius wrote.  Today, the Ignatian Volunteer Corps lives out this principle by serving the poor, by working for a more just society, and by imparting the Catholic tradition of Ignatian spirituality.

A national network, headquartered in Baltimore, the Ignatian Volunteer Corps (IVC) provides retired men and women opportunities to volunteer in their local communities while deepening their faith.  Volunteers typically work two days per week in a social service agency and also participate in

Growing the Number of Volunteers in Baltimore

The Knott Foundation made an early investment in IVC to help test their plans for dramatically increasing the organization’s number of volunteers.  The grant allowed IVC’s Baltimore regional office – which had been in danger of closing – to hire a Regional Director who, in just one year, demonstrated significant results:  Ten new volunteers recruited.  Seven partner agencies added.  An extra 4,500 hours of service performed.  $20,000 in new partnership fees secured.  And nearly $13,500 in individual gifts and fundraising event income raised.

These results, along with important data about the retiring population and rising social service needs, led IVC to launch a national campaign to raise $1 million and double the number of IVC volunteers over three years.

“The Magnify! Campaign recognizes the tremendous talent and opportunity that exists in the growing retired population,” states Mary McGinnity, National Executive Director.  “Every day over the next two decades, 10,000 Baby Boomers will celebrate their 65th birthday.  IVC is a great outlet for them to stay active, give back to the community, and grow in their faith.”

“Many IVC volunteers have lived their lives without really having known or worked with the poor,” continues Mary.  “When they come to us, they are transformed through their experience.”

One such couple is George and Mary Jean Schuette, married 39 years, who joined IVC last year.  George, a former Social Security employee, now works at Project PLASE, a housing and support services provider for the homeless.  Mary Jean, a former Catholic school teacher, tutors GED students at Christopher Place Employment Academy, an intensive residential program for formerly homeless men.  Each night George and Mary Jean recall the discerning question of their spiritual reflector, “Where do you find God in your work with these men?”

Sr. Marilyn Dunphy, MHSH, Baltimore’s Regional Director, sums it up:  “Volunteer service in and of itself is wonderful.  Volunteer service rooted in faith, like Ignatian spirituality, has a deeper meaning.  Prayer and reflection allow our volunteers to take back a new understanding of, and a new perspective to, their work and their lives.”