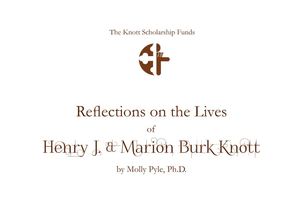 While the Knott Foundation and Knott Scholarship Funds are two separate entities, our roots are mutually tied to the incredible philanthropy of Marion and Henry Knott, who in many respects were two of the most generous people in Baltimore in their day.

Reflections is a historical composition that paints a portrait of two very different people who, through their ups and downs, ended up sharing the same unwavering love for their family, the same commitment to Catholic education, and the same understanding of the Baltimore community.

Marion and Henry each came from very humble beginnings.  They met on a blind date in 1926 and two years later, during the time of the Great Depression, were married.  In those early days, they struggled to make ends meet and raise a family of 13 children.

Growing up, Henry and his father did not agree on many things.  Yet Henry learned from his father to be hardworking and stubborn, just like he was.  After two years of college at Loyola, Henry dropped out and educated himself by reading texts and authors that were of interest to him; he was an avid reader and collector of the Loeb editions of the Greek classics.  Henry believed, and in turn taught his children, that we are simply stewards of the money we earn on Earth, and with that money, we have an obligation to give back to our community.

Marion’s mother died when she was four years’ old, and so she went to live with an aunt in Baltimore. When Marion was growing up, she lacked a caring and consistent role model in many respects of her life.  Yet she taught herself how to be a good mother to her 13 children, how to be a quiet strength within the family, and how to run a busy household.  She was a strong, independent person, and she showed her daughters how to be the same.  Marion encouraged all her children to do what was best for them, and to be their own person.

By virtue of their life experience, Marion and Henry were self-made people.  He was hard charging, an informally but well-educated businessperson.  And she was a compassionate, resilient and patient woman.  This combination of personalities led them to great success in business, in family, in philanthropy, and in life in general.

Marion and Henry both believed that you could give just as much of yourself to help others as you could with a monetary gift. They instilled this commitment to volunteerism in their children, who in turn have encouraged the same in their children.  Mr. Knott, his children, his grandchildren, and his great grandchildren have served on many boards and given their time and treasure to many charitable organizations throughout the Baltimore area.

In 1981 Marion and Henry established the Marion Burk Knott Scholarship Fund, and in 1988 they started the Marion I. & Henry J. Knott Scholarship Fund.  Through these merit based scholarship programs, their dream was to help Catholic students continue to pursue a Catholic education, develop outstanding moral character, and become future leaders in the community.  Since their inception, as many as 1700 scholarships have been awarded to over 1500 students.

I very much enjoyed reading Reflections, and I hope you do as well.  On behalf of the Foundation, I would also like to extend our thanks to author Molly Pyle, Ph.D. for researching and writing the portrait, and to the Knott Scholarship Funds for publishing it.