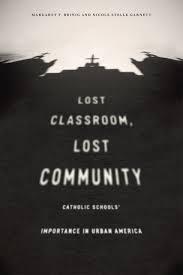 As an alumna of the University of Notre Dame, I was pleased to attend a recent event where two Notre Dame professors presented their findings on a novel claim in the Catholic education landscape.  In their book Lost Classroom, Lost Community (The University of Chicago Press, 2014), authors Margaret F. Brinig and Nicole Stelle Garnett offer empirical evidence that Catholic schools improve neighborhoods in important ways beyond educational outcomes.

To prove their thesis, the authors examine the Archdiocese of Chicago – the largest private school system in the United States – alongside data from the Project on Human Development in Chicago Neighborhoods and police beat crime reports.  The lynchpin of their analysis is the identification of an instrumental variable for why Catholic schools in Chicago were closed.  It turns out that factors related to the leadership of the pastor at each school were more predictive of school closures than anything else.  This allowed the researchers to disaggregate the data from demographic variables that might otherwise have predicted the neighborhood’s decline.  Why is this technicality so important?  Because it paves the way for the holy grail of statistical modeling:  an empirical, causal link between the closure of a Catholic school and the decline of the surrounding neighborhood.

Statistics aside, the authors’ point is this:  urban Catholic schools are more than just teaching institutions, they are community institutions.  They help to sustain the peace, build trust among people, and promote social and physical order in the community.  Brinig and Garnett further state that Catholic schools may be unique to public schools and charter schools in this regard, as the neighborhood social cohesion data could not be replicated with public charter schools.  The converse of their claim, of course, is that Catholic school closures result in more crime and disorder and less social cohesion in urban districts.

I was especially moved by the authors’ research and analysis for two reasons.

First, I believe in the power of education to transform lives, and this new research points to ways that Catholic schools are able to do that beyond just focusing on test scores, graduation rates, college acceptance rates, or even the spiritual development of our young people.  It turns out that just living in a neighborhood with a Catholic school, but not necessarily even going to it, can be advantageous.

Second, I believe that relationships matter.  If people know one another, if people are not only neighbors but friends, they are more likely to respect each other and be tolerant of their individual differences.  Since we now know that Catholic schools promote relationships between people beyond the school itself, then I would venture to say that the Church’s presence in these neighborhoods is not only fulfilling an educational mission, but a parallel mission of community fellowship and trust.

As a Catholic family foundation dedicated to strengthening the community in the Archdiocese of Baltimore, Brinig and Garnett’s book really hit home.  It suggests that our giving to Catholic schools, which has exceeded $4 million over the past five years, has a strong impact both inside and outside of school walls.  Indeed, it seems plausible to consider Catholic education as one of the Church’s most powerful tools in community development, urban renewal, and poverty alleviation.  This idea – when coupled with the renaissance our Catholic schools are experiencing, as reported by Philanthropy Roundtable’s Andy Smarick and Kelly Robson – is both promising and profound.

Brinig and Garnett’s statistical analysis is not for the faint of heart.  Their presentation of the data is extensive, and there is ample background and history to digest.  But the bottom line is worth the read, because it says that our Catholic schools matter more to our city than the average person might think.