What We’re Reading: Where Good Ideas Come From by Steven Johnson 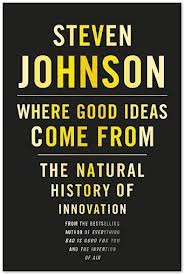 Eureka!  Your flash of brilliance is actually a slow hunch built on a foundation of spare parts.  Go ahead and insert a “wah waah” here.  While we are primed to believe in the notion of a genius sitting alone in a room, a lab or on top of a mountain tinkering away until a fully formed brilliant idea flashes, Johnson contends that creativity and innovation do not happen when we (or systems) close ourselves off.

Scanning a landscape of over five centuries and the fields of biology, chemistry, technology and culture, Where Good Ideas Come From:  The Natural History of Innovation is an exploration of how ideas are generated, why failure matters, and the benefits of diversity.

Johnson does a remarkable job of breaking down the myth of the lone genius without dampening the reality of human and environmental/biological ingenuity.  With examples as varied as YouTube and neonatal incubators, Johnson demonstrates that we are indeed capable of generating great ideas; however, these ideas are constrained by the “adjacent possible.”  That is, they cannot leapfrog the environment as it currently exists, and they need to enter into the “liquid network” – an environment that is open and allows connections to form in order to create change from the idea.

One of the most fascinating examples used to highlight his premise is Darwin’s “slow hunch” towards The Origin of Species.  Darwin opened himself up to the physical and scientific world, collecting his observations without strictly categorizing them.  In doing so, he was able to make connections between seemingly disparate environments, systems, and research that led him to his “aha” moment:  creating a unifying foundation for the field of what is now called life science.

It is safe to say that Darwin would not have drafted his seminal work had he locked himself in a room or sailed on the Beagle alone.  I would also venture it is safe to say that the world’s greatest challenges – poverty, economic disparity, education etc., many of which we in philanthropy dedicate ourselves to addressing – will not be solved if we silo ourselves off.  Ideas need to mix things up in the “liquid network” and recognize the boundaries of the “adjacent possible” in order for them to move from the conceptual to the actual.

So, when that next great idea pops into your head, do not keep it to yourself.  Go ahead and share it.  Who knows, it could prove to be the missing element in creating one of the world’s greatest “aha” moments.