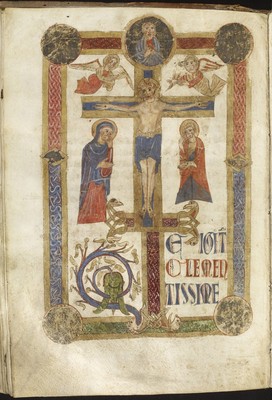 The St. Francis Missal is a 12th-century manuscript and beloved to be a relic of touch of St. Francis of Assisi – founder of the Franciscan Friars and the patron saint of Italy, animals, and merchants.  The Missal is housed at the Walters Art Museum in Baltimore and was recently exhibited with the support of the Knott Foundation and other funders.

The Story of the Missal

In the year 1208, St. Francis of Assisi and two of his followers were debating what God’s plan was for them. Unable to come to agreement, they sought answers at the Church of San Nicolò in Assisi, where Francis often attended. Legend has it that they approached the Missal sitting on the Church’s altar – opened it three times at random – and every time the text on the page implored them to renounce all earthly goods and follow the Lord. This pivotal moment laid the foundation for the Franciscan order.

"The St. Francis Missal is our most frequently requested manuscript,” comments Lynley Anne Herbert, Ph.D., Curator of Rare Books and Manuscripts & Curatorial Chair.  “Franciscans from around the world regularly make pilgrimages to the museum to be in its presence.”

The restoration of the St. Francis Missal is one of the most extensive conservation treatments on a manuscript completed in the 85-year history of the Walters’ Conservation and Technical Research Lab.  Decades of use took a toll on the book’s fragile binding, so there was an urgency to restore it.  Overall, the project took two years under the careful direction of Abigail Quandt, Head of Book and Paper Conservation, and Cathie Magee, a Fellow funded by the Andrew W. Mellon Foundation.

The project’s numbers are impressive:  5,000 conservation hours logged; 599 images digitized; 285 manuscript pages preserved; and 30 Walters staff assisting on the project.  “We are thrilled to share these scholarly discoveries and to have been able to make this incredible object accessible to all, both onsite and online,” comments Julia Marciari-Alexander, Ph.D., Andrea B. and John H. Laporte Director of the Walters.

“Through this exhibit we can tell the story of St. Francis and his followers, St. Clare and St. Anthony, and the impact that they had worldwide," shares Quandt.  The exhibition features the legendary Missal along with 17 other objects, including manuscripts, paintings, ivories, ceramics, and documentation of the Missal’s restoration.

“This extensive reconstruction really brought the book back to life, now and for future generations,” concludes Herbert.