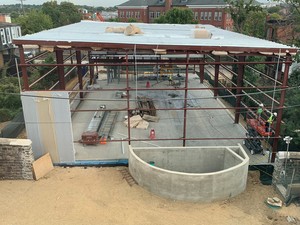 “It’s so great to see the kids watching the new gym being built,” observes Sister Peggy Juskelis, President of Mother Seton Academy.  “They see this as a sign of people’s belief in them.  To the kids, it’s not just a steel structure, it’s a symbol of the great promise the future holds and the transformative effect of education.”

Located in the Greenmount neighborhood of Baltimore City, Mother Seton Academy was founded in 1993 by a group of six Roman Catholic religious orders.  It was named in honor of St. Elizabeth Ann Seton, the first American-born saint and the foundress of the country’s first free Catholic school for girls.

Mother Seton Academy’s 83 boys and girls in grades 6-8 are all on full scholarships.  They come to the school through a competitive admissions process, where it is typical to have 80 students applying for only 30 seats.  To date, the school has graduated 470 students who have since gone on to become police officers, professional educators, members of the armed services, and more.

“The kids are with us beyond the three years they are here,” comments Sister Peggy.  Mother Seton’s graduate support program follows the students through high school, ensuring a near perfect 100% graduation rate every year.

Before this new gym was under construction, Mother Seton Academy’s students practiced basketball on a makeshift court obstructed by two poles.  “They never had a full court to run,” explains Sister Peggy.  “Now they will feel like real athletes in a true, high-quality middle school gymnasium.”

The gymnasium will also include a music and community room.  “The local community is very pleased with what we’re doing,” shares Sister Peggy.  The school plans to offer the community room to the adjacent parish, St. Ann’s Catholic Church, as well as local associations for neighborhood events.

Fundraising for the Project

“The Knott Foundation was the first grantor to support the project,” comments Rachel Trask, Development Director.  After the Foundation’s support, Mother Seton Academy’s campaign total grew from $1.3 million to over $3 million.  Beyond the capital campaign, Mother Seton Academy also raises approximately $1.5 million each year to fund the school’s day-to-day operations.

Sister Peggy concludes:  “The philanthropic community is foundational to the success of Mother Seton Academy and our students.  Your faith in our students helps them to believe in themselves.”