Speaking Up for Foster Kids 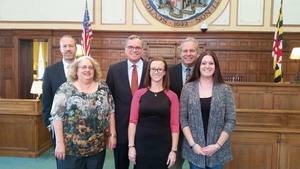 “While the number of children in foster care is declining in Maryland, the number in Allegany County has nearly doubled over the last four years, largely due to the drug epidemic,” says Misty Raines, Executive Director of CASA of Allegany County.  Citing one of many examples, Raines shares the story of a young mother in Cumberland who recently died from an overdose, leaving her two young children with no options other than foster care.

Located in rural western Maryland, Court Appointed Special Advocates (CASA) of Allegany County was founded in 2012 by two local citizens who had seen the results and benefits of CASA programs in nearby towns in West Virginia.  The organization hired Raines as Executive Director in 2013, and in 2014 their first CASA was appointed by the court.

CASA of Allegany County has trained approximately 40 CASAs since its founding.  These volunteers are currently advocating for approximately 25 foster children, speaking to everyone on the child’s behalf in order to create the best life situation for them – whether that is adoption, kinship care, or other living arrangements.

“People in Allegany County are really starting to recognize our program and see the benefits,” comments Raines.  “We actually had to waitlist a number of volunteers at our most recent training, because interest was so high.”

Being There for Kids

The Knott Foundation has awarded CASA of Allegany County two grants since it opened its doors.  “When I think of where we were in the very beginning with our first grant – wondering what the next year would look like for all these kids in the foster care system – to where we are today with so many active CASAs, it is a testament to all the great people who have worked so hard to make a difference in our community,” shares Raines.

CASA is a serious volunteer commitment in the life of a child, and volunteers are trained accordingly.  CASAs go through a rigorous 5-week training program based on a national curriculum.  All are asked to commit to 12 months of service, or the life of the case to which they are assigned.  For some volunteers, this can mean several years of service.

Such is the case for CASA Don, who has served his child for three years.  Once or twice a month, CASA Don drives more than three hours to visit the child in a special group home setting.  They go out for lunch, shop for things the child might need, see a movie, or celebrate birthdays together.  CASA Don is his only visitor; the boy’s mother died of cancer, his father was his abuser, and he has no siblings.

CASA Roni Ringler sums it up like this:  “Albert Einstein said, ‘Only a life lived for others is worth living.’  Through my decades of adulthood, I have tried to live by this – as a teacher, crisis counselor, friend, and now, a CASA.  Becoming a CASA has made me a better person, a more determined person, with the hope my child will be reunited with parents, foster parents, or adoption that will regain a stable and happy home life for them. It is my honor to be a CASA and I am thankful for this.”