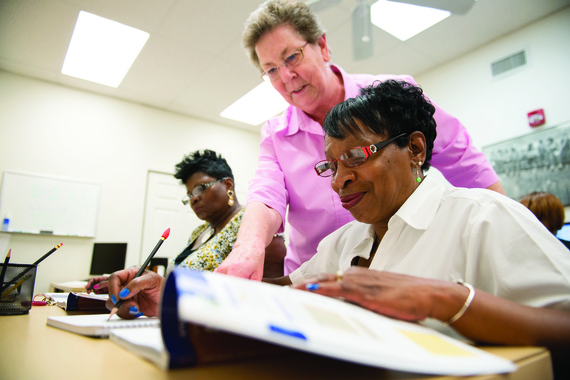 When Marian House opened its doors 33 years ago, their vision was to provide a brighter future to homeless women coming out of the prison system.  Today, while Marian House has expanded to serve homeless women coming from multiple avenues, that vision has stayed true:  to transform society by unlocking the potential of women who need a supportive place to live and heal.

The women living in Marian House’s transitional housing program are more than residents; they help run the organization.  Residents staff the reception office – answering the phones and greeting visitors at the door – and they also cook dinner for each other every night and clean-up the kitchen afterwards.

“There are so many ways we’re trying to teach the women positive habits, from having dinner together, to recycling, to taking time to focus on their own personal development,” says Katie Allston, Executive Director.

Marian House’s rigorous program starts with an application, interview, and intake process, and women stay for an average of 11 months.  “The women who come here are motivated to change their lives for the better,” adds Libby Keady, Grant Writer.  “They have to demonstrate a capacity and drive to be a part of a structured program.”

Marian House’s headquarters was built in 1928.  It originally was used as a convent for nuns teaching at St. Bernard’s Catholic School across the street.  The building now contains 29 single rooms, 4 family apartments, an education center, a commercial kitchen, a meeting room, and a large dining room for the women in Marian House’s transitional housing program, as well as space for approximately one dozen staff.

The Knott Foundation made a grant to Marian House to help install a new roof fitted with a state-of-the-art solar photovoltaic system on their headquarters building.  Marian House’s headquarters now produces 75%-100% of its own energy.  Any surplus energy is sold back to the power company, thereby creating a new revenue stream for the organization.

Rooted in the Catholic tradition of their founders, the Sisters of Mercy and the School Sisters of Notre Dame, the work that Marian House does both to help homeless women and to be good environmental stewards has a broad positive impact.

“The focus of Marian House is to help women get back on their feet again, because women are often the primary teachers for their children.  In that way, the ripple effect of Marian House is really quite extraordinary,” states Pete McIver, Director of Operations.

When talking about her time in the program, one resident reflects:  “I now want a career, not just a job.  It’s the first time I’ve had a chance to do that. ” Marian House has clearly helped her unlock her potential and envision a brighter future for herself.