Home > Knott Blog > A Roof for the Masses

A Roof for the Masses 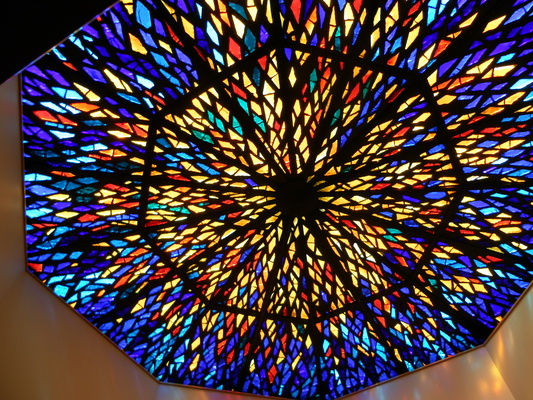 Upon entering Saint Margaret Church, a magnificent prism of colorful stained glass shines over the baptistery.  A large portion of the glass was actually closed off to direct sunlight until Saint Margaret replaced its roof and opened up the feature to natural light.  “It has made such a difference for the presentation of this space,” proclaims Sandy Laird, Facilities Manager.  “It was dark, and now it’s light and much more spacious.”

Each weekend, 3,000 people attend Mass at Saint Margaret Parish, a Roman Catholic community with two locations in the heart of Bel Air, Maryland.  As the largest parish in Harford County – and one of the largest in the Archdiocese of Baltimore – Saint Margaret serves as the center of Catholic spiritual life for thousands of families.

The pastor, Monsignor Michael Schleupner, explains the overall design of the worship space:  “When you’re walking from the narthex into the sanctuary, the surrounding stained glass panels have a water-like effect.  It’s as if you’re walking through the waters of baptism, which you need before entering the church to receive the sacrament of the Eucharist.”

Replacing the 30-year-old roof of the church was the first phase of a larger renovation project at Saint Margaret, partially funded by an even larger campaign for the entire Archdiocese.  “We raised a record amount of money from this parish for the Archdiocesan campaign, while also raising money for our own capital needs,” shares Monsignor Schleupner.

“While we’re a large parish, we’re still a working class parish,” Monsignor Schleupner states.  Support for the campaign is evident among a wide base of donors, who have all contributed what they can to make the church’s dream a reality.  Among those donors, Saint Margaret received a capital grant from the Knott Foundation to help replace the aging roof.  In this case, the construction project not only fortified the building, but also brought a new element of light and beauty to the entrance of the church.

Community building is an integral part of the Catholic Church’s mission, and the campaign and renovations of Saint Margaret have brought the parish community together in multiple ways.  For a time, parishioners attended Mass in the school gym, which the Liturgy Committee transformed into a worship space.  People not only continued to come to Mass at Saint Margaret throughout the renovations, but many made personal gifts to the campaign.

With a new roof and other infrastructure upgrades, Saint Margaret Parish has turned its attention to enhancing the feeling of fellowship in the interior church.  It is this strong feeling of communion with God and one another that makes Saint Margaret the spiritual home for so many Catholic families throughout Harford County.