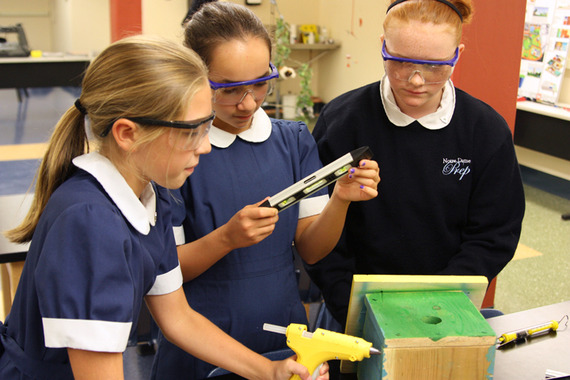 Two students, Francesca Zink ’16 and Victoria Niller ’16, stand in a room full of students and talk excitedly about robotics.  They explain that last year they teamed up and designed a robot named Tank the Shark.  While it took only three days to design Tank, it took months to construct him, wire him to a control panel, master how to power his movements, and give him a distinctive personality.  This year they have teamed up again, and their robot’s movements are automated by a computer program they wrote.  (In a show of Maryland pride, he’s a racehorse with a Preakness theme.)

About NDP and STEAM

At Notre Dame Preparatory School (NDP), a Catholic school for girls in grades 6-12 sponsored by the School Sisters of Notre Dame, students have a multitude of opportunities to interact with the worlds of science, technology, engineering, art, and math, or STEAM.

In 2014, the Knott Foundation helped to fund the construction of a new STEAM center on campus.  The center is a glass-enclosed space peppered with state-of-the-art equipment and bustling with activity.  “At least once a day someone stops in front of the glass to see what’s happening,” shares Patrick Cusick, Engineering Teacher.

Interest in engineering at NDP has skyrocketed in recent years.  In 2012, 11 students were enrolled in Introduction to Engineering.  Four years later that number is projected to be 54 students in the introductory class and an additional 12 in Design/Build Engineering, the more advanced course.

Yet engineering is not a singular effort.  It is about teamwork, including understanding and communicating the team’s product and process for getting there.  Francesca adds, “Engineering isn’t just math and science.  It’s also people skills.  You really need to explain what you’re doing, and NDP prepares us well for that.”

“Everyone puts their part into the team,” Francesca notes.  “I think that’s so cool about engineering.  You’re not just in your cubicle; you’re bouncing ideas off each other.”

The teamwork at NDP goes beyond the students and encompasses the faculty and academic departments as well.  Taking an interdisciplinary approach, STEAM subjects are incorporated into the humanities (for example, students 3D print the skull of Yorick from Hamlet) and the theatre program, where engineering students conceptualize and construct set designs for the theatre program.

While the STEAM program and center at NDP provide the skills, awareness, and confidence for girls to excel in these subjects, the benefit extends beyond these areas.  “What strikes me the most is the joy,” declares Marianne Reichelt, Acting Principal.  “The students in the STEAM center are always energetic and engaged.  It’s the classroom where the students are the most excited.”  Victoria agrees:  “The engineering class is the reason I decided to come to NDP.”