What We’re Reading: What Technology Wants by Kevin Kelly

A provocative thesis about who is driving technological innovation – people or technology itself? 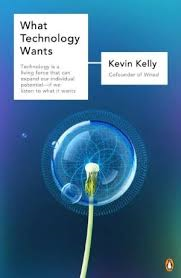 I recently read What Technology Wants by Kevin Kelly, one of the co-founders of Wired magazine.

In my role at the Foundation, I regularly encounter a broad spectrum of nonprofits who are seeking funding to pursue technology related projects.  While this has afforded me a clear picture of what technology these organizations want, the picture is less clear and far more intriguing when I think about the concept that technology might, in fact, want something from us.

Published in 2010, Kelly’s book and the theories contained within have been described as “provocative,” “revolutionary,” and “balderdash.”  In What Technology Wants, the author promotes the thesis that technology has traveled an evolutionary path in much the same way as biological evolution; describing technology as a “near-living system” and an “evolving organism.” In sum, much like our own evolution, technology’s evolution is “inevitable” and constantly adapting through the selection of useful traits.

While many, as did I, will find his theory a bit thin at times, I did find his notion that as much as we choose technology, technology is choosing us. Kelly does however offer some persuasive examples to support his claim. One example that resonated with me was his description of the thousand plus years of evolution in rail lines.  He writes that Roman roads which were specifically sized to accommodate war chariots were translated into the British railroad system and subsequently developed into rail tracks in the United States.  It was amazing to learn that ancient Roman roads measuring 4 feet 8 ½ inches wide, designed to carry war chariots, had jumped continents and were being deployed in the same specific measurement to carry fuel rockets that power the space shuttle today.  While I am not sure that I agree that this evolution was “pre-ordained,” I must admit, I was intrigued by the notion that technology changes in part because it is learning from humankind, evolving alongside of us every day, and perhaps even choosing us and how we use it.

What Technology Wants was a groundbreaking book when it was released and continues to be a challenging and fascinating read four years later.  Whether you ascribe to the author’s almost mystical belief that “just as water ’wants’ to flow downhill and life tends to fill available ecological niches, technology similarly ‘wants’ to expand and evolve,“ it is undeniable that technology does indeed expand and evolve.  The challenge is to not recoil in fear, but to contemplate this evolution and decide what value and virtue there is for creating common good.

So, when you reach for your next iPad or cell phone, or load your next app, you may want to consider whether you are making the choice, or, if you are being chosen. As for myself, I will continue to consider the inevitability of technology, be excited and awed by its possibilities, and cultivate preparedness for the rise of the machines!