What We're Reading: Moonwalking with Einstein by Joshua Foer 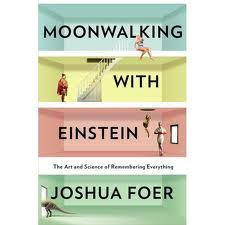 I recently read Moonwalking with Einstein:  The Art and Science of Remembering Everything by Joshua Foer.

Foer was a journalist and, being a journalist, he needed to know a little bit about a lot of things.  For several years he followed the U.S. Memory Championship tournaments and wrote articles about the competitors.  One day, a tournament champion asked him if he wanted to learn how to memorize.  Moonwalking with Einstein is about Foer's resulting yearlong quest to improve his memory and transform his understanding of the human brain.

Memory is all about technique and understanding how the brain works.  Foer believes anyone can have a good memory; it is simply a matter of learning to think in more memorable ways.  Everything that you pay any degree of attention to is recorded in a permanent part of your brain.  A memory only comes into consciousness if it is cued by some other thought or perception.

In the book, Foer explains that when a person's name gets caught on the tip of your tongue, your memory is frustrated.  He says you need to think of some piece of information to try to link that person's name in your memory to your consciousness.  You can use this same concept for remembering events by positioning them in time relative to other life events.

In his quest to master his own memory, Foer learned that he could train his brain, but also that he needed to be more mindful of the world around him and take notice of everyday life.  Notably, after a year of exploring the field of human memory, he competed against twelve other contestants and won the U.S. Memory Championship.

Foer believes we don't need to acquire a better memory -- we just need to use the memory we have more effectively.