A story about the evolution of human motivation 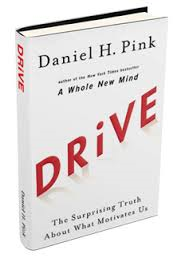 Drive:  The Surprising Truth About What Motivates Us describes the evolution of motivation, from survival in the beginning of time, to a structured system of reward and punishment, to an emerging economy based on self-direction and the value of ideas.

Most people still believe that the best way to motivate is with money.  Pink refutes that notion.  "On the edges of the economy -- slowly, but inexorably -- old-fashioned ideas of management are giving way to a newfangled emphasis on self-direction," he observes.

Pink describes this new motivation as one where people are not incentivized by economic reward, but rather the satisfaction that comes from directing their own lives, learning and creating new things, and doing good.

To adapt to this new system of motivation, Pink argues, people need autonomy over the four T's:  task, time, technique, and team.  "Control leads to compliance; autonomy leads to engagement," he states.

In the end, Pink exposes a gap between what science knows truly motivates us and what business actually does.  (Take the billable hour, for instance.)  He challenges us to embrace this new system of motivation and adapt our business practices to fashion a more fulfilling work environment based on principle, not precedent.