Working for Justice and Peace 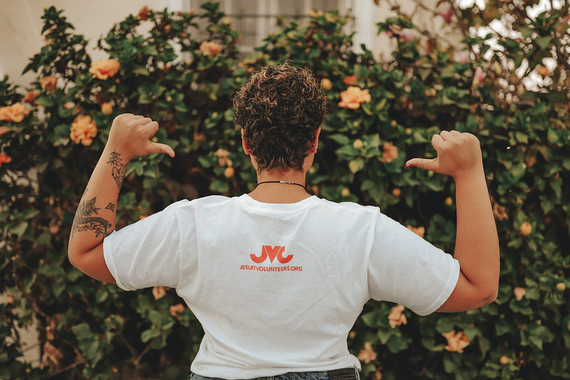 After graduating from Boston College with a degree in business and economics, Codie Perry knew two things:  first, he wanted to use his educational background to serve others; and second, he didn’t want to sit in a cubicle all day.  Perry applied to Jesuit Volunteer Corps and was placed at St. Vincent de Paul Church in Baltimore City.  There, he was charged with running the Church’s outreach ministries in a community experiencing deep poverty.

“The level of poverty and homelessness was something I had not seen before,” reflects Perry.  “It was eye-opening and tough, but also gave my work greater purpose and connected me on a deeper level to the City.”

Over the past 60 years, the Jesuit Volunteer Corps (JVC) has become one of the largest lay, Catholic, full-time volunteer programs in the world.  With approximately 200 volunteers each year in 37 cities and 5 countries, Jesuit Volunteers (JVs) put their faith into action through one year of service at nonprofit agencies in high-need communities.

“Orientation reminded me why I chose JVC in the first place.  Having a community formed around faith and getting to engage in meaningful conversations was one of the hallmarks of my college experience.  Getting to have a community in which I could feel supported in who I am and my faith was very consoling to have as I moved to a new city with new people,” commented one Baltimore JV during orientation week.

Not only is Baltimore the national headquarters of JVC, it is also home to five JVs every year.  The Knott Foundation has supported JVC’s presence in Baltimore for over 30 years.  The agencies where JVs work in Baltimore have remained consistent for the last several years and include Cristo Rey Jesuit High School, Loyola Early Learning Center, Public Justice Center, and St. Vincent de Paul Beans & Bread/Homeless Outreach.

“It is hard to put the value of the Jesuit Volunteers into a few words!” exclaims Erica Meadows, School Director at Loyola Early Learning Center.  “The JVC program is a key part of our school.  They are such a positive addition to our team and understand the mission of the school because of their background and experience with Catholic and Jesuit education,” she relays.

As for Codie Perry, he wrapped up his work at St. Vincent de Paul Church five years ago, then returned to his hometown in Massachusetts.  Perry recently came back to Baltimore to join the team at Johns Hopkins’ Office of Economic Development.  There, he helps grow the small business community and promotes local goods and talent.  “Something about my year of service drew me back to Baltimore,” he admits.  “I was inspired by how many people and organizations are dedicated to bringing justice and peace to this community, and I wanted to help carry that mantle forward in my own work.”