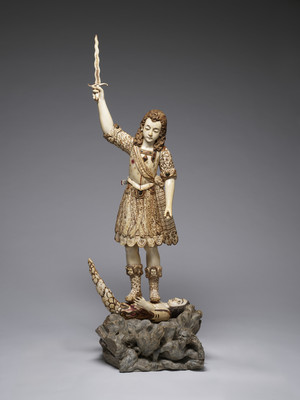 “Conservation and repair of our collective cultural heritage is key to our understanding of world history and the universal human need to create,” observes Julie Lauffenburger, Director of Conservation, Collections, and Technical Research.  “Works of art that have been preserved and shared with the public help bring history to life and foster conversation about world events, religion, culture, and life in periods beyond our own.”

About the Walters Art Museum

Established in 1934, the mission of the Walters Art Museum is to bring art and people together for enjoyment, discovery, and learning.

Located in Baltimore’s historic Mount Vernon neighborhood, the Walters offers free admission to all visitors.  The museum’s campus includes five buildings and 36,000 art objects from the Mediterranean, Africa, East Asia, Europe, the Middle East, and the Americas.  By collecting, preserving, and interpreting art, the Walter’s creates a space for people of every background to engage in dialogue and be touched by art.

About St. Michael the Archangel

St. Michael is an archangel in Judaism, Christianity, and Islam.  In Roman Catholic tradition, St. Michael is the guardian of the Church and the leader of heaven’s forces in their triumph over the powers of evil.  He is the patron saint of soldiers, police officers, and doctors.

The Walters collection includes a rare 17th-century ivory sculpture of St. Michael the Archangel, which was not on display for several decades due to needed restoration.  The Knott Foundation helped fund conservation treatment that repaired his broken wings and consolidated paint and gilding loss on the statue.

Today, Michael stands nearly four feet tall, with long hair, wings, pleated skirt, sash, and boots.  He holds a sword above his head as he stands on the body of the devil.  The size and detail of the St. Michael statue are rare, and it would have been an expensive and high value sculpture to produce.

A Story of Global Trade

When it came into the collection in the early part of the 20th century, the St. Michael statue was believed to have been made in Italy during the Renaissance period.  However, further research revealed his true origins.

“This striking 17th century sculpture was made in Manilla from African elephant tusks for a church in Mexico,” reveals Katarina Ziegler, Director of Institutional Giving & Government Affairs.  It was created as a devotional statue for a Mexican church, by an artisan in the Philippines, with material from Africa.  “What a remarkable story of global exchange of ideas, art, crafts, materials, and faiths!” she exclaims.

The St. Michael statue is a physical embodiment of early international trade routes and the spread of Catholic iconography and beliefs throughout the world.  Its history is a marriage of three continents, dating back some 400 years.  It is a global treasure in our own local art museum.