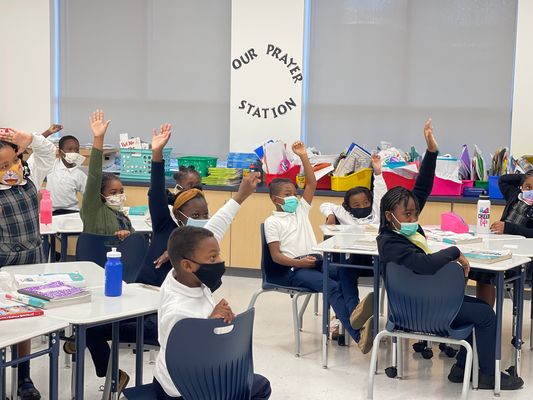 Mother Mary Elizabeth Lange moved to Baltimore from Cuba.  She opened a school for girls of color in her home in Fells Point, which became the only provider of Catholic education to black children in Baltimore during the 19th Century.  She also founded the Oblate Sisters of Providence, the first religious order for women of African descent in the United States, and is a candidate for sainthood.

Every floor of the school has an image of Mother Mary Lange.

During the ribbon cutting and blessing of the new school, eighth-grader Jaylah Golder announced to the crowd:  “I intend to follow in the footsteps of Mother Lange by leading others to do good and try my best to stand up for those who aren’t big enough to stand up for themselves.”

Enrolling students in a new tradition

Mother Mary Lange Catholic School began its inaugural year with over 400 children in grades pre-K through 8.  The students hail from 70 zip codes.  Only approximately 20% are Catholic.

Building amenities and partnerships to serve the community

The Knott Foundation contributed to the capital campaign to build the new school.

Once a vacant lot in the City, Mother Mary Lange is now a model of top-notch amenities:  fully-equipped art and science labs; a spacious library; a cafeteria and gymnasium with a stage for student productions; a turf field; two playgrounds; and a chapel.  “We are the first archdiocesan elementary school in Baltimore to have a tabernacle in the chapel,” comments Jordan.  “The Archbishop is very proud of that.”

The school’s health suite also features a partnership with University of Maryland Children’s Hospital, where doctors offer physicals for students and the school nurse has access to a telehealth line during the day.  A private health suite, hands-free plumbing, and sanitary devices are new features that were incorporated during construction, which further enhance the school’s focus on student health.

“This is a loving, secure, Catholic community,” concludes Jordan, “and we look forward to becoming part of the social fabric of this neighborhood for many years to come.”