Home > Knott Blog > The Secret Is in the Chef

The Secret Is in the Chef 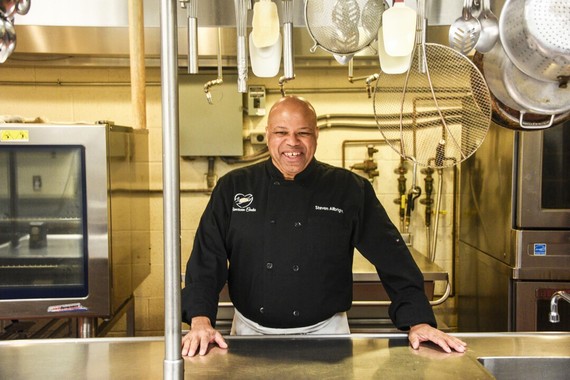 In Baltimore City, a group of red brick row houses sit on West 23rd Street where, in 1968, Sister Irene Marshiano, O.S.F. opened an emergency food and clothing center when local residents told her that’s what they needed most.

Now more than 50 years later, the Franciscan Center remains a ministry of the Sisters of St. Francis of Assisi and offers a continuum of care to local people in need – including food, clothing, emergency health services, counseling, and technology training to help clients become as self-sufficient as possible.

A key ingredient for success

A hallmark of the Franciscan Center’s programming is daily hot lunch service.  As a longtime supporter of the Center, the Knott Foundation recently made a grant to support the Center’s new culinary director who helps lead their dining services program.

Enter Chef Steve Allbright, a two-time graduate of Stratford University with an Advanced Culinary Degree and Baking & Pastry Arts Degree, a decorated US Navy Veteran, and an experienced chef at multiple high-end restaurants.

“As much as I appreciate casseroles, I believe cooks are supposed to cook,” proclaims Chef Allbright.  In his first year at the Franciscan Center, he partnered with four farms in and around Baltimore to increase the amount of fresh food and vegetables coming into the Center.  He also started teaching people how to make healthy and delicious meals with donated provisions.

“Folks eat with their eyes, so we plate what we’re going to serve every day and post it to our Facebook Page,” says Chef Allbright.

By changing the products they were getting and where they were getting them from, the Franciscan Center dramatically reduced its food budget from $125,000 per year to $75,000 per year.  They also made other nutritional changes, like serving water instead of a sugary lemon drink traditionally offered to the hot lunch patrons.  Then COVID hit.

Expanding during the pandemic

“We’ve just about tripled the amount of food we typically serve during the pandemic,” explains Griffin.  The Center changed its model from only serving food at the Center, to adding a meal delivery system, going to apartment complex and homeless encampments throughout Baltimore City.

“By going to where the people are and bringing them healthy meals, we have also created some very helpful conversations and opportunities for our patrons,” comments Griffin.  “We are able to help them with more than just food.”