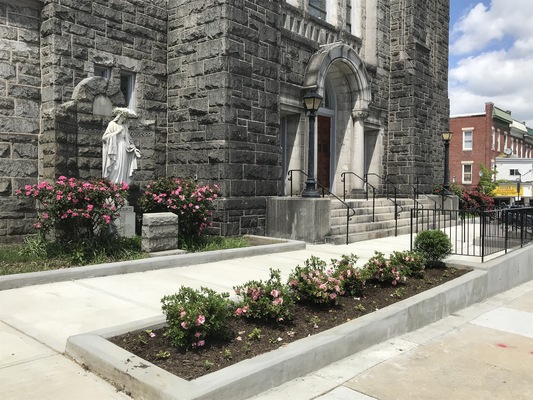 Situated in the Edmondson Village neighborhood of West Baltimore, St. Bernardine Catholic Church has a storied history.  As one of the largest Catholic parishes in the City in the 1950s, it nearly closed 20 years later when it struggled to adapt to changing demographics and a changing Catholic Church.

In 1975, Msgr. Edward Miller arrived and chose to see opportunity in the face of the Church’s challenges.  He worked with the community to grow St. Bernardine’s into the largest African American parish in the Archdiocese of Baltimore.  Today, under the leadership of Msgr. Richard Bozzelli, the parish serves 900 households and is celebrating its 90th anniversary year.

A Pillar of the Community

“Father Miller was a pillar of the community,” reflects Msgr. Bozzelli.  “His philosophy was, let’s look at who the neighborhood is and put a Church together for the neighborhood.’  He knew everybody and was highly respected.”

Msgr. Bozzelli’s focus on the community has been a steadying force:  the parish is active in the local community association, 40 West Ministries; they host an ongoing food pantry; they provide Christmas gifts and dinner to 100 families each year; and they host an annual neighborhood walk on Martin Luther King Day in honor of their late pastor.

Built in 1928, St. Bernardine’s Church continues to have a strong spiritual presence, but a deteriorating structural one.  Msgr. Bozzelli recently launched a capital campaign, Destined Under the Dome, to make some much-needed repairs and upgrades.  The initial campaign goal was $800,000, and the Church has pledges just shy of $900,000.

A grant from the Knott Foundation, designated to repair the exterior steps leading up to the Church, helped kick-off the campaign.  With the Foundation’s funds as well as help from parishioners and the Archdiocese, the entrance to the Church was renovated to include new steps, a landing with a small courtyard, and multiple access points from the Edmondson Avenue and Mt. Holly Street.

“When people can see concrete progress – and in this case, it was literally concrete – they are energized,” shares Fr. Rich.  “The funding the Knott Foundation gave us really launched our campaign.  I’m not sure we would’ve had the same result without it.”