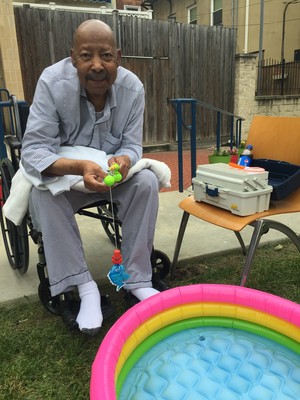 When Melvin came to Joseph Richey Hospice, he likely did not expect a party thrown in his honor.  It turns out Melvin loved to fish, and he often spoke to the hospice staff about taking a fishing trip before he reached the end.  When a trip with a friend fell through, the staff decided to take matters into their own hands:  they threw a fishing party for Melvin in the backyard of the house, complete with a kiddie pool, fishing poles, and party hats.

For people like Melvin, Joseph Richey Hospice is often the only place to find quality, end-of-life care.  “There are no other residential options in Baltimore City for people who don’t have the resources or a strong support system,” remarks Ted Blankenship, Director of Development.

Joseph Richey House is a 19-bed hospice in Baltimore.  No one is turned away due to an inability to pay.  Like Melvin, patients often do not have a caregiver at home, or even a stable living environment.  Some have experienced homelessness, incarceration, or addiction, and many have been underserved medically.

Patients are referred to Joseph Richey by a physician because they suffer from a terminal illness and have less than six months to live.  What they find when they get there, however, is a deeply compassionate medical team and support system, including a social worker, bereavement counselor, chaplain, and more than 20 physicians who volunteer their time to treat patients at the House.

Joseph Richey was founded in 1987 by The All Saints Sisters of the Poor and Mt. Calvary Church.  Since that time, approximately 8,000 patients and their families have been served.  The Knott Foundation has supported the organization for ten years.

In 2014, Joseph Richey was acquired by Gilchrist Center Baltimore to bolster its financial standing and prospects for future success.  “Both Joseph Richey and Gilchrist saw a need that existed for end-of-life care in Baltimore, that otherwise wasn’t being filled.  Joining forces ensured that commitment to serving the City and the underserved,” comments Blankenship.

Gilchrist’s relationship with Joseph Richey has helped the hospice serve more medically complex patients, as well as cover the uncompensated care cost that the small nonprofit faces each year due in large part to the fact that Medicaid does not cover patients’ food and lodging.  “We really depend on grants and donations from individuals to be able to deliver the care we are providing,” shares Blankenship.

Looking to the future

“With a strong organizational structure in place, recent capital renovations, and a burgeoning fundraising campaign, we are all very pleased with the growth that’s been happening at Joseph Richey House,” says Blankenship.

“We may be a small nonprofit, often flying below the radar screen,” he notes, “but we always find a way to serve those who need it most… and do so in a way that brings compassion, dignity, and a personal touch to their final life celebration.”